Blood Meridian: Or the Evening Redness in the West (Hardcover) 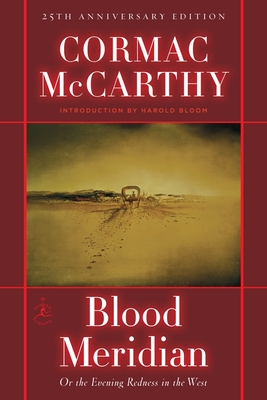 The “masterpiece” (Michael Herr) of the New York Times bestselling, Pulitzer Prize–winning author of The Road, No Country for Old Men, The Passenger, and Stella Maris

“Cormac McCarthy is the worthy disciple both of Melville and Faulkner. I venture that no other living American novelist, not even Pynchon, has given us a book as strong and memorable.”—Harold Bloom, from his Introduction

“McCarthy is a writer to be read, to be admired, and quite honestly—envied.”—Ralph Ellison

Widely considered one of the finest novels by a living writer, Blood Meridian is an epic tale of the violence and corruption that attended America’s westward expansion, brilliantly subverting the conventions of the Western novel and the mythology of the “Wild West.” Its wounded hero, the Kid, a fourteen-year-old Tennessean, must confront the extraordinary brutality of the Glanton gang, a murderous cadre on an official mission to scalp Indians. Seeming to preside over this nightmarish world is the diabolical Judge Holden, one of the most unforgettable characters in American fiction.

Based on historical events that took place on the Texas-Mexico border in the 1850s, Blood Meridian represents a genius vision of the historical West, one whose stature has only grown in the years since its publication.

The novels of the American writer Cormac McCarthy have received a number of literary awards, including the Pulitzer Prize, the National Book Award, and the National Book Critics Circle Award. His works adapted to film include All the Pretty Horses, The Road, and No Country for Old Men—the latter film receiving four Academy Awards, including the award for Best Picture.

“The fulfilled renown of Moby-Dick and of As I Lay Dying is augmented by Blood Meridian, since Cormac McCarthy is the worthy disciple both of Melville and Faulkner. I venture that no other living American novelist, not even Pynchon, has given us a book as strong and memorable.”—Harold Bloom, from his Introduction

“McCarthy can only be compared with our greatest writers, with Melville and Faulkner, and this is his masterpiece.”—Michael Herr

“[Blood Meridian] reads like a connotation of The Inferno, The Iliad, and Moby-Dick. . . . An extraordinary, breathtaking achievement.”—John Banville, The Independent (London)

“McCarthy is a writer to be read, to be admired, and quite honestly—envied.”—Ralph Ellison

“McCarthy is a born narrator, and his writing has, line by line, the stab of actuality. He is here to stay.”—Robert Penn Warren