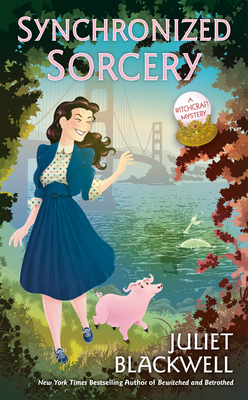 This is book number 11 in the Witchcraft Mystery series.

As witch and vintage store owner Lily Ivory steps into her new role as leader of the Bay Area's magical community, she's faced with a mysterious death of magical proportions...

Strange things are happening in Lily Ivory's San Francisco. First, she finds a vintage mermaid costume which dates from the 1939 San Francisco's Treasure Island World's Fair – and which gives off distinctly peculiar vibrations. Next, she stumbles upon a dead man in the office of her predecessor, and as the community's new leader, she feels compelled to track down the culprit. Just when Lily thinks things can't get any stranger, a man appears claiming to be her half-brother, spouting ideas about the mystical prophecy involving San Francisco and their family...

When the dead man is linked to the mysterious mermaid costume, and then yet another victim is found on Treasure Island, Lily uncovers ties between the long-ago World’s fair and the current murders, and begins to wonder whether the killer might be hiding in plain sight. But unless Lily can figure everything out in time, there may be yet another body floating in San Francisco Bay.

Juliet Blackwell is the pseudonym for the New York Times bestselling author who writes the Witchcraft Mystery series and the Haunted Home Renovation series. She is also the author of The Lost Carousel of Provence, Letters from Paris, The Paris Key, The Vineyards of Champagne, and Off the Wild Coast of Brittany. Together with her sister, Juliet wrote the Art Lover's Mystery series. The first in that series, Feint of Art, was nominated for an Agatha Award for Best First Novel.