The Unwomanly Face of War: An Oral History of Women in World War II (Paperback) 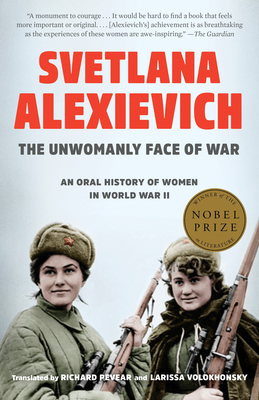 Easily the most disturbing, crucial, amazing, gut wrenching, unbelievably powerful history book I've ever read. Stares unflinchingly at the horror of war and makes a mockery of it's pageantry. Literally breathless while reading this, I often had to set the book down and sit with what I'd just read, which is in and of itself a near impossible task... humans weren't meant to comprehend such things, nor were we meant to be experience them. And yet. If you've never read Alexievich before, start here. If you know a military history lover, put down the Grant, Churchill and Patton bios and do them the tremendous favor of buying them this instead.

For more than three decades, Svetlana Alexievich has been the memory and conscience of the twentieth century. When the Swedish Academy awarded her the Nobel Prize, it cited her invention of “a new kind of literary genre,” describing her work as “a history of emotions . . . a history of the soul.”

In The Unwomanly Face of War, Alexievich chronicles the experiences of the Soviet women who fought on the front lines, on the home front, and in the occupied territories. These women—more than a million in total—were nurses and doctors, pilots, tank drivers, machine-gunners, and snipers. They battled alongside men, and yet, after the victory, their efforts and sacrifices were forgotten.

Alexievich traveled thousands of miles and visited more than a hundred towns to record these women’s stories. Together, this symphony of voices reveals a different aspect of the war—the everyday details of life in combat left out of the official histories.

Translated by the renowned Richard Pevear and Larissa Volokhonsky, The Unwomanly Face of War is a powerful and poignant account of the central conflict of the twentieth century, a kaleidoscopic portrait of the human side of war.

THE WINNER OF THE NOBEL PRIZE IN LITERATURE
“for her polyphonic writings, a monument to suffering and courage in our time.”

“A landmark.”—Timothy Snyder, author of On Tyranny: Twenty Lessons from the Twentieth Century

“An astonishing book, harrowing and life-affirming . . . It deserves the widest possible readership.”—Paula Hawkins, author of The Girl on the Train

“Alexievich has gained probably the world’s deepest, most eloquent understanding of the post-Soviet condition. . . . [She] has consistently chronicled that which has been intentionally forgotten.”—Masha Gessen, National Book Award–winning author of The Future Is History

Svetlana Alexievich was born in Ivano-Frankivsk, Ukraine, in 1948 and has spent most of her life in the Soviet Union and present-day Belarus, with prolonged periods of exile in Western Europe. Starting out as a journalist, she developed her own nonfiction genre, which gathers a chorus of voices to describe a specific historical moment. Her works include The Unwomanly Face of War (1985), Last Witnesses (1985), Zinky Boys (1990), Voices from Chernobyl (1997), and Secondhand Time (2013). She has won many international awards, including the 2015 Nobel Prize in Literature “for her polyphonic writings, a monument to suffering and courage in our time.”

“A monument to courage . . . It would be hard to find a book that feels more important or original. . . . [Svetlana] Alexievich’s account of the second world war as seen through the eyes of hundreds of women is an extraordinary thing. . . . Her achievement is as breathtaking as the experiences of these women are awe-inspiring.”—The Guardian

“Magnificent . . . After decades of the war being remembered by ‘men writing about men,’ she aims to give voice to an aging generation of women who found themselves dismissed not just as storytellers but also as veterans, mothers and even potential wives. . . . Alexievich presents less a straightforward oral history of World War II than a literary excavation of memory itself.”—The New York Times Book Review

“Could not have appeared at a more opportune time . . . Women did everything—this book reminds and reveals. They learned to pilot planes and drop bombs, to shoot targets from great distances. . . . Alexievich has turned their voices into history’s psalm.”—The Boston Globe

“Harrowing and moving . . . Alexievich did an enormous service, recovering these stories. . . .The Unwomanly Face of War tells the story of these forgotten women, and its great achievement is that it gives credit to their contribution but also to the hell they endured.”—The Washington Post

“We should resolve to read this book alongside the world news report. . . .  Ms. Alexievich never tries to simplify. . . . Refusing to pass judgment, crediting all, she listens, suffers and brings to life. . . . It took years and many miles of traveling to find and capture all the testimonies here. . . . We still end up feeling that we have been sitting at her side. With her, we hear the memories of partisans, guerrilla fighters trapped behind the lines.”—The Wall Street Journal

“Alexievich has forged her own distinctive identity: as a witness to witnesses who usually go unheard. . . . In a ‘post-truth’ era when journalism is under pressure—susceptible to propaganda, sensationalism, and ‘alternative facts’—the power of documentary literature stands out more clearly than ever. . . . Listen to Alexievich.”—The Atlantic

“[A] remarkable collection of testimonies . . . Sitting at kitchen tables, Alexievich coaxes out of the women stories that describe a reality vastly different from the officially sanctioned version. . . . They speak guardedly but vividly of fleeting encounters, deep relationships, unexpressed feelings.”—The New Yorker

“Continually shocking and tearjerking . . . The introductory materials here, in which Alexievich quotes from the journals she kept while working on the project and from her later reflections and dealings with censors, are as compelling as the primary text.”—The Christian Science Monitor

“Alexievich gives us an idea of how the army women were perceived by society, during the war and afterwards. . . . These voices, thanks to Alexievich, have themselves become part of history.”—Financial Times