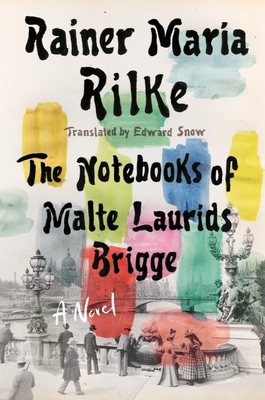 A stunning, revelatory new translation of the only novel by one of the greatest poets of the twentieth century, from one of “the most trustworthy and exhilarating of Rilke’s contemporary translators” (Michael Dirda, Washington Post).

A groundbreaking masterpiece of early European modernism originally published in 1910, The Notebooks of Malte Laurids Brigge unspools the vivid reflections of the titular young Danish nobleman and poet. From his Paris garret, Brigge records his encounters with the city and its outcasts, muses on his family history, and lays bare his earliest experiences of fear, tenderness, and desolation.

With a poet’s feel for language and a keen instinct for storytelling, Rainer Maria Rilke forges a dazzlingly fractured coming-of-age narrative, kaleidoscopic in its alternation of vivid present encounters and equally alive memories of childhood. Strikingly contemporary, The Notebooks of Malte Laurids Brigge reveals a writer metabolizing his own experiences to yield still-essential questions about fiction and reality, empathy and psychosis, and—above all—life, love, and death.

In a fascinating introduction, award-winning translator Edward Snow explores the overlaps between Rilke’s experiences and those of his protagonist, and shows with granular attention the novel’s capacity for nuance and sympathy. Snow’s exquisite translation captures as never before the astonishing cadences and musical clarity of the poet’s prose. It reveals The Notebooks of Malte Laurids Brigge as an urgent contemporary achievement, more than one hundred years after it was written.

Rainer Maria Rilke (1875–1926) was one of the most acclaimed German-language poets of the twentieth century.

Edward Snow is a professor of English at Rice University. He is the recipient of an American Academy of Arts and Letters Award in Literature for his Rilke translations and has twice received the Academy of American Poets’ Harold Morton Landon Translation Award. He lives in Houston, Texas.

This book has been central for many young poets, in many languages, for generations. Now, Edward Snow has created a fresh, inviting version in English.
— Robert Pinsky

Reading Rilke in English, one faces three doors: read Edward Snow, read a lesser translator, or learn German. Just as Snow has produced masterpieces in the past, his rendering of The Notebooks of Malte Laurids Brigge is a revelation. Though I had read the volume before with curiosity, I found Snow’s version a page-turner. I devoured it like a velociraptor.

This brilliant new translation walks right off the page into the streets of Paris and into the recessed corridors of memory and impassioned imagination.… Sentence by sentence, Snow releases the hallucinatory revelations of a mind creating its own indelible tracks between ‘curiosity and dread,’ between shocking estrangement and almost unbearable sympathy. I first read the Notebooks in earlier translations fifty years ago; they have never felt so radiant, so nuanced, so immediately yet enduringly prophetic.
— Peter Sacks

ward Snow, that most sensitive and deft translator of Rilke’s poetry, has outdone himself by rendering the German writer’s prose classic in all its eerie, crepuscular shadings.… Every sentence glistens here, as childhood and manhood, past and present uncannily merge, while Malte, the protagonist-narrator, teaches himself to see. The result is a treasure to savor slowly and gratefully.
— Phillip Lopate