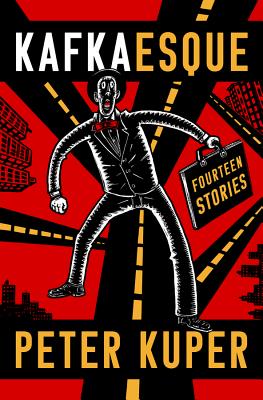 Long fascinated with the work of Franz Kafka, Peter Kuper began illustrating his stories in 1988. Initially drawn to the master’s dark humor, Kuper adapted the stories over the years to plumb their deeper truths. Kuper’s style deliberately evokes Lynd Ward and Frans Masereel, contemporaries of Kafka whose wordless novels captured much of the same claustrophobia and mania as Kafka’s tales. Working from new translations of the classic texts, Kuper has reimagined these iconic stories for the twenty-first century, using setting and perspective to comment on contemporary issues like civil rights and homelessness.

Longtime lovers of Kafka will appreciate Kuper’s innovative interpretations, while Kafka novices will discover a haunting introduction to some of the great writer’s most beguiling stories, including "A Hunger Artist," "In The Penal Colony," and "The Burrow." Kafkaesque stands somewhere between adaptation and wholly original creation, going beyond a simple illustration of Kafka’s words to become a stunning work of art.

Franz Kafka (1883–1924) was one of the most important writers of the twentieth century. His major novels include The Trial, The Castle, and Amerika.

Peter Kuper contributes cartoons to The New Yorker and illustrated MAD magazine’s Spy vs. Spy. His graphic novels include an adaptation of Heart of Darkness and the Eisner Award–winning Ruins.


Peter Kuper contributes cartoons to The New Yorker and illustrated MAD magazine’s Spy vs. Spy. His graphic novels include an adaptation of Heart of Darkness and the Eisner Award–winning Ruins.

[Kuper] does what I love. Jazz. This book is a series of riffs, visual improvisations on short takes by the old master. It becomes a diverting, even daring, high-wire act, where Kafka’s stoic Euro-alienation meets and merges with Kuper’s thoroughly American rock-and-roll alienation.
— Jules Feiffer, Pulitzer Prize–winning cartoonist

Kafka's work is opaque and ripe for reinterpretation, but it is Kuper's art that makes it so fresh.
— Tom Tivnan - Times Literary Supplement

Woe to the reader who tries to skim Kafkaesque…. [Kuper’s] faux woodcuts, with their explosive faces and grim chiaroscuro, cannot be easily digested — a supreme virtue.
— Vulture

Kafkaesque has the quality of being not simply an adaptation but an artistic object in its own right.

Kuper proves adept at using the synergy between text and image to both expand Kafka’s ideas and trim his word counts… A richly innovative interpretation that honors the source while expanding the material.
— Kirkus Reviews