Climbing Free: My Life in the Vertical World (Paperback) 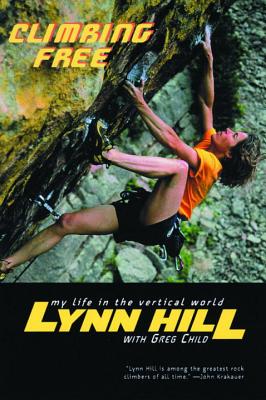 The legendary rock climber who redefined the boundaries of her sport tells her story.

From the age of thirteen when she began climbing, it was clear Lynn Hill had an unusual gift. Before long she was arguably the best rock climber in the world, establishing routes so bold and difficult that few others could follow. And in 1994, Lynn succeeded on a climb that no one—man or woman—has been able to repeat: the first "free ascent" of the Nose on Yosemite's El Capitan, which means that she climbed 3,000 feet of vertical granite without using gear to aid her ascent—and all in under twenty-three hours. In Climbing Free Hill describes her famous climb and meditates on how she harnesses the strength and the courage to push herself to such extremes. She tells of her near-fatal 80-foot fall, her youth as a stunt artist for Hollywood, her friendships with climbing's most colorful personalities, and the tragedies and triumphs of her life in the vertical world. More than merely a story of adventure, this book stands out as a genuine, singular account of a life richly and boldly lived.

Lynn Hill has been featured in Life, Vanity Fair, Outside, Time, National Geographic, and in the IMAX film Extreme. She lives in Moab, Utah.

Greg Child is a world-class mountaineer and the author of several books on climbing. He lives near Moab, Utah.

Lynn Hill isn't just one of the best female climbers in the world—she is among the greatest rock climbers of all time.
— Jon Krakauer

Lynn Hill’s groundbreaking free ascent of the Nose on El Cap, detailed at length here alongside some of her other notable accomplishments, cemented her position in the vertical elite. She wasn’t the first woman to accomplish the feat—she was the first person to do so. It’s no wonder that contemporary boundary-pushers like Margo Hayes cite her as an influence for their own game-changing pursuits.

A legend who has redefined the boundaries of adventure sports.
— Wired