Devotions Upon Emergent Occasions and Death's Duel: With the Life of Dr. John Donne by Izaak Walton (Paperback) 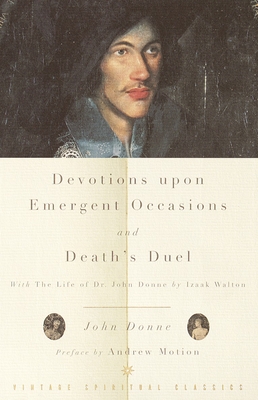 By John Donne, Andrew Motion (Preface by)
$14.95
On Our Shelves Now (Please wait for us to confirm and & contact you when it's ready)

John Donne (1572-1631) is best known as the greatest English metaphysical poet. But there was another dimension to Donne's life and writing that, if less well known, is no less profound and beautiful.

Born into an aristocratic Catholic family, Donne joined the Church of England at the age of twenty-one out of fear of persecution. At the age of forty-three, he gave up his preoccupations with secular prestige and devoted himself utterly to religion. It was eight years later when, battered with fever, the deaths of his beloved wife, several of his children, and many dear lifelong friends, he composed Devotions upon Emergent Occasions. There is both trauma and great drama in this extended meditation on the meaning of mortality, the possibility of salvation, and the true nature of the passage of eternal life. With a new introduction by poet and biographer Andrew Motion, one of the most revered books of Christian devotion speaks to us again of the higher aspirations of man and the always-present possibility of a relationship with God.

This long out of print edition also contains Donne's last sermon, "Death's Duel" as well as the short colorful biography of him written by his contemporary Izaak Walton.

John Donne was born into a Catholic family in 1572. After a conventional education at Hart Hall, Oxford, and Lincoln's Inn, he took part in the Earl of Essex's expedition to the Azores in 1597. He secretly married Anne More in December 1601 and was imprisoned by her father, Sir George More, in the Fleet two months later. He was ordained as a priest in January 1615 and took a doctorate of divinity at Cambridge the same year. He was made dean of St. Paul's Cathedral in London in 1621, a position he held until his death in 1631. He is famous for the sermons he preached in his later years as well as for his poems.

Andrew Motion is the author of three biographies and a number of books of poetry. He served as Poet Laureate of Great Britain from 1999 to 2009, and is currently a professor of creative writing at the University of East Anglia. Motion serves as head of the literature panel of the Arts Council of England and frequently broadcasts on the BBC.