The Man Who Ate Everything (Paperback) 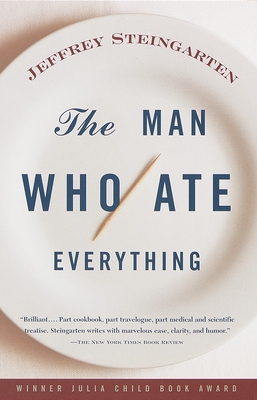 By Jeffrey Steingarten
$18.00
Email or call for price.

A food critic for Vogue sets out on culinary adventures and misadventures so offbeat and engrossing, it's impossible not to laugh, learn, and salivate along the way. Investigative, humble, delicious, and very, very funny.

When Jeffrey Steingarten was appointed food critic for Vogue, he systematically set out to overcome his distaste for such things as kimchi, lard, Greek cuisine, and blue food. He succeeded at all but the last: Steingarten is "fairly sure that God meant the color blue mainly for food that has gone bad." In this impassioned, mouth-watering, and outrageously funny book, Steingarten devotes the same Zen-like discipline and gluttonous curiosity to practically everything that anyone anywhere has ever called "dinner."

Follow Steingarten as he jets off to sample choucroute in Alsace, hand-massaged beef in Japan, and the mother of all ice creams in Sicily. Sweat with him as he tries to re-create the perfect sourdough, bottle his own mineral water, and drop excess poundage at a luxury spa. Join him as he mounts a heroic--and hilarious--defense of salt, sugar, and fat (though he has some nice things to say about Olestra). Stuffed with offbeat erudition and recipes so good they ought to be illegal, The Man Who Ate Everything is a gift for anyone who loves food.

Jeffrey Steingarten trained to become a food writer at Harvard College, Harvard Law School, the Massachusetts Institute of Technology, and the Harvard Lampoon.  For the past eight years he has been the internationally feared and acclaimed food critic of Vogue magazine.  He has been the food correspondent for the online magazine Slate. For essays in this collection, Mr. Steingarten has won countless awards from the James Beard Foundation and the International Association of Culinary Professionals. On Bastille Day, 1994, the French Republic made him a Chevalier in the Order of Merit for his writing on French gastronomy.  As a man who ate everything, Chevalier Steingarten has no favorite food, color, or song.  His preferred eating destinations, however, are Memphis, Paris, Alba, Chengdu--and his loft in New York City.