Fantastic Numbers and Where to Find Them: A Cosmic Quest from Zero to Infinity (Hardcover) 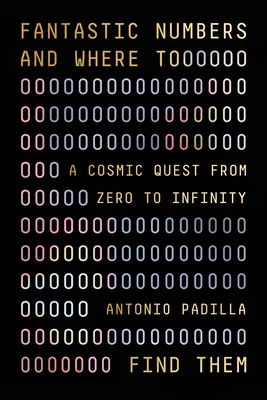 A fun, dazzling exploration of the strange numbers that illuminate the ultimate nature of reality.

For particularly brilliant theoretical physicists like James Clerk Maxwell, Paul Dirac, or Albert Einstein, the search for mathematical truths led to strange new understandings of the ultimate nature of reality. But what are these truths? What are the mysterious numbers that explain the universe?

In Fantastic Numbers and Where to Find Them, the leading theoretical physicist and YouTube star Antonio Padilla takes us on an irreverent cosmic tour of nine of the most extraordinary numbers in physics, offering a startling picture of how the universe works. These strange numbers include Graham’s number, which is so large that if you thought about it in the wrong way, your head would collapse into a singularity; TREE(3), whose finite nature can never be definitively proved, because to do so would take so much time that the universe would experience a Poincaré Recurrence—resetting to precisely the state it currently holds, down to the arrangement of individual atoms; and 10^{-120}, measuring the desperately unlikely balance of energy needed to allow the universe to exist for more than just a moment, to extend beyond the size of a single atom—in other words, the mystery of our unexpected universe.

Leading us down the rabbit hole to a deeper understanding of reality, Padilla explains how these unusual numbers are the key to understanding such mind-boggling phenomena as black holes, relativity, and the problem of the cosmological constant—that the two best and most rigorously tested ways of understanding the universe contradict one another. Fantastic Numbers and Where to Find Them is a combination of popular and cutting-edge science—and a lively, entertaining, and even funny exploration of the most fundamental truths about the universe.

Antonio Padilla is a leading theoretical physicist and cosmologist at the University of Nottingham. He is the Associate Director of the new Nottingham Centre of Gravity and has served as the chair of U.K. Cosmology for over a decade. In 2016, he and his collaborator shared the Buchalter Cosmology Prize for their work on the cosmological constant. He is also a star of the Numberphile YouTube network, where his most popular videos include a discussion of Ramanujan’s sum of all positive integers, which has been viewed more than seven million times.

"A fast-paced and dramatic telling of the history of mathematics that is ultimately concerned with convincing us why we should care . . . Conceptualizing the real-world application of abstract mathematics is every professor's dream for their students, and Padilla makes it a reality." —Amy Brady, Scientific American

"[An] electrifying debut . . . [Padilla is] a stellar guide, shifting from playful to serious with ease, and his love for his subject is infectious and his knowledge vast in a way that is fitting for the material. This one deserves wide readership." —Publishers Weekly (starred review)

"A fascinating book that guides us through the labyrinth of numbers and what they mean . . . [A] lively history . . . Padilla has a knack for effectively deconstructing difficult concepts . . . Like James Gleick’s Chaos and Stephen Hawking’s A Brief History of Time, [Fantastic Numbers and Where to Find Them] is a remarkable piece of work . . . Astonishing in its sweep and depth, this book offers a unique way of looking at the universe." —Kirkus Reviews

"It was said of the famous Indian mathematician Ramanujan that he knew every number as his personal friend. If you'd like to get to know some of the most charismatic of these characters then Antonio Padilla has written a beautiful Who's Who of the world of numbers and their role in the make-up of our universe." —Marcus du Sautoy, author of Thinking Better

"This is an extraordinary book. Tony Padilla has been able to weave a remarkable set of mathematical facts into a mesmerising story that kept me gripped throughout. He has an intensity and passion that I haven't seen for a long time in popular science." —Pedro G. Ferreira, author of The Perfect Theory

“This delightful book purports to be about numbers, but is really a window onto the astonishing scope and scale of the universe in which we live. You will be amazed at the mind-bending ideas science has proposed in order to grasp reality, and be impressed that our minds are able to bend that far.” —Sean Carroll, author of Something Deeply Hidden: Quantum Worlds and the Emergence of Spacetime