Looking for the Good War: American Amnesia and the Violent Pursuit of Happiness (Hardcover) 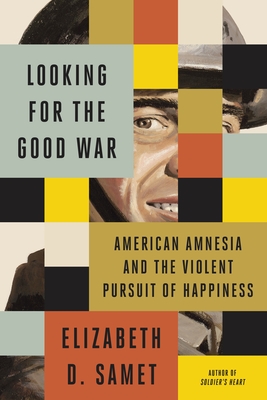 “A remarkable book, from its title and subtitle to its last words . . . A stirring indictment of American sentimentality about war.” —Robert G. Kaiser, The Washington Post

In Looking for the Good War, Elizabeth D. Samet reexamines the literature, art, and culture that emerged after World War II, bringing her expertise as a professor of English at West Point to bear on the complexity of the postwar period in national life. She exposes the confusion about American identity that was expressed during and immediately after the war, and the deep national ambivalence toward war, violence, and veterans—all of which were suppressed in subsequent decades by a dangerously sentimental attitude toward the United States’ “exceptional” history and destiny.

Samet finds the war's ambivalent legacy in some of its most heavily mythologized figures: the war correspondent epitomized by Ernie Pyle, the character of the erstwhile G.I. turned either cop or criminal in the pulp fiction and feature films of the late 1940s, the disaffected Civil War veteran who looms so large on the screen in the Cold War Western, and the resurgent military hero of the post-Vietnam period. Taken together, these figures reveal key elements of postwar attitudes toward violence, liberty, and nation—attitudes that have shaped domestic and foreign policy and that respond in various ways to various assumptions about national identity and purpose established or affirmed by World War II.

As the United States reassesses its roles in Afghanistan and the Middle East, the time has come to rethink our national mythology: the way that World War II shaped our sense of national destiny, our beliefs about the use of American military force throughout the world, and our inability to accept the realities of the twenty-first century’s decades of devastating conflict.

Elizabeth D. Samet is the author of No Man's Land: Preparing for War and Peace in Post-9/11 America; Soldier's Heart: Reading Literature Through Peace and War at West Point, which won the Los Angeles Times Book Prize for Current Interest and was named one of the 100 Notable Books of 2007 by The New York Times; and Willing Obedience: Citizens, Soldiers, and the Progress of Consent in America, 1776–1898. Samet is the editor of Leadership: Essential Writings by Our Greatest Thinkers, The Annotated Memoirs of Ulysses S. Grant, and World War II Memoirs: Pacific Theater. The recipient of a National Endowment for the Humanities Public Scholar Grant and the Hiett Prize in the Humanities, she was also awarded a Guggenheim Fellowship to support the research and writing of Looking for the Good War. She is a professor of English at West Point.

“Looking for the Good War is a remarkable book, from its title and subtitle to its last words . . . A stirring indictment of American sentimentality about war . . . Samet is a fine writer with a gift for powerful arguments articulated in elegant prose.” —Robert G. Kaiser, The Washington Post

“Discerning . . . A work of unsparing demystification—and there is something hopeful and even inspiring in this. Like the cadets [Samet] teaches at West Point, civilians would do well to see World War II as something other than a buoyant tale of American goodness trouncing Nazi evil.” —Jennifer Szalai, The New York Times

“Magisterial . . . Samet has taught soldiers who served in 21st-century wars, and she forces us to confront the fact that these wars were consumed as myths back home.” —Ben Rhodes, The New York Times Book Review

“Samet offers a cultural and literary counterpoint to the Ambrose-Brokaw-Spielberg industrial complex of Second World War remembrance . . . ‘In a climate in which the pressures to sentimentalize are so strong and victory and defeat are so difficult to measure,’ she writes, ‘it seems a moral imperative to discover another way to read and write about a war.’ Her retrospective on the Good War is another such way, and a worthwhile one . . . Time enables every new generation to rethink and redefine a conflict with a more dispassionate and informed gaze—as this book itself proves.” —Carlos Lozada, The New Yorker

“Samet’s major contribution to our understanding of this disconnect [between Americans and the consequences of their country’s imperial policies] is to track the specific ways in which the manipulation of popular culture has kept us from learning the lessons of history . . . She guides us through a political-cultural landscape well worth exploring.” —Jeff Faux, Dissent

“[Samet] must be an engaging, inspiring, and utterly subversive classroom presence. Looking for the Good War suggests that she is fearless as well . . . Fascinating.” —Andrew J. Bacevich, Commonweal

“Compelling, enlightening and elegantly written . . . This richly rewarding and thought-provoking book splashes World War II history across a broad canvas, with insightful discussions of the works of Homer and Shakespeare and the wisdom of Abraham Lincoln." —Roger Bishop, BookPage (starred review)

"Samet smoothly distills the myths Americans have told themselves to justify the epithet of the 'Good War' for a noble battle to liberate the world from fascism . . . Not just timely, Samet’s work is incisively argued and revelatory in its criticism." —Kirkus (starred review)

"Elizabeth Samet’s Looking for the Good War is a genealogy of diverse strands of thought about America and war. The cultural currents she traces from World War II continue to shape how we imagine ourselves, how we critique ourselves, and the possibilities that we see in the American experiment. Stunning." —Phil Klay, author of Missionaries

"In an era when the moral corruption of our foreign wars has manifestly demeaned and degraded the life of the country, Elizabeth Samet's brilliant Looking for the Good War is essential reading. This eloquent, far-ranging analysis of the national psyche goes as far as any book I've ever read toward explaining the peculiar American yen for war and more war. As Samet shows, there's no such thing as a 'good' war, and all propositions to the contrary are lies." —Ben Fountain, author of Beautiful Country Burn Again

"In this powerful and pathbreaking book, Elizabeth Samet shows us how the myth of World War II as 'the good war' was created and how this damaging fiction has distorted our politics and blinded us to the real choices we make as a nation when we decide to use military force. Samet challenges us to look at World War II anew and in this exemplary study gives us the means to do so." —Drew Gilpin Faust, author of Republic of Suffering: Death and the American Civil War

"'It is impossible to fight one war at a time,' Elizabeth Samet proposes in this superb review of how World War II has been remembered as a dry run for every new American war since. But historical parallels can less inform than lead astray. Those who hope to end our country’s ongoing global misadventures owe Samet greatly, for the delicacy and elegance of her book paradoxically make it an even more devastating indictment." —Samuel Moyn, author of Humane: How the United States Abandoned Peace and Reinvented War

“Looking for the Good War is a passionately indignant account of how ‘the pains of war’—in particular, those of the Second World War—'are quickly forgotten while its imagined glories grow.’ Drawing on a wide array of memoirs, journalism, movies, novels, and oral histories, Elizabeth Samet—a distinguished professor of literature at the U.S. Military Academy—shows that when sentimentality becomes ‘the natural ally of jingoism,’ war breeds more war. She does not argue that World War II should not have been fought, but she demands that it be truthfully remembered. This is an urgent and disturbing book by one of our most morally serious and challenging cultural historians.” —Andrew Delbanco, author of The War Before the War: Fugitive Slaves and the Struggle for America’s Soul from the Revolution to the Civil War

"A brilliant, illuminating, and vivid examination of the idea of World War II in American culture that explores how perceptions of the 'good war' have shaped our collective identity and sense of national destiny. Elizabeth Samet provides an absorbing assessment of the ways in which American attitudes toward World War II—in literature, film, and other outlets—have evolved over the past eighty years. Samet makes a forceful case for thinking deeply and critically about the role of national memory in shaping U.S. domestic and foreign policies, and she reveals in the process 'the degree to which the past is but a tissue of fragile fictions, the future just as unstable.'” —General David Petraeus, US Army (Ret.), former Commander of the Surge in Iraq, US Central Command, and the International Security Assistance Force in Afghanistan, and former Director of the CIA