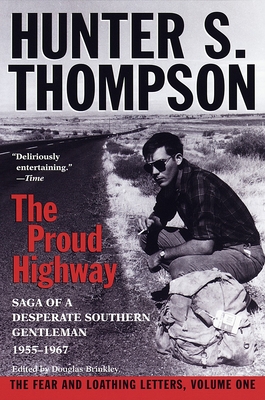 Here, for the first time, is the private and most intimate correspondence of one of America's most influential and incisive journalists--Hunter S. Thompson. In letters to a Who's Who of luminaries from Norman Mailer to Charles Kuralt, Tom Wolfe to Lyndon Johnson, William Styron to Joan Baez--not to mention his mother, the NRA, and a chain of newspaper editors--Thompson vividly catches the tenor of the times in 1960s America and channels it all through his own razor-sharp perspective. Passionate in their admiration, merciless in their scorn, and never anything less than fascinating, the dispatches of The Proud Highway offer an unprecedented and penetrating gaze into the evolution of the most outrageous raconteur/provocateur ever to assault a typewriter.

Hunter S. Thompson (July 18, 1937–February 20, 2005) was an American journalist and author. He was known for his flamboyant writing style, most notably deployed in Fear and Loathing in Las Vegas, which blurred the distinctions between writer and subject, fiction and nonfiction. The best source on Thompson's writing style and personality is Thompson himself. His books include Hell's Angels: A Strange and Terrible Saga (1966), Fear and Loathing in Las Vegas: A Savage Journey to the Heart of the American Dream (1972), Fear and Loathing on the Campaign Trail ’72 (1973); The Great Shark Hunt: Strange Tales from a Strange Time (1979); The Curse of Lono (1983); Generation of Swine, Gonzo Papers Vol. 2: Tales of Shame and Degradation in the 80's (1988); and Songs of the Doomed (1990).

William J. Kennedy, author, screenwriter and playwright, was born and raised in Albany, New York. Kennedy brought his native city to literary life in many of his works. The Albany cycle includes Legs, Billy Phelan's Greatest Game, and the Pulitzer Prize–winning Ironweed.

Douglas Brinkley is a professor of history at Rice University, the CNN Presidential Historian, and a contributing editor at Vanity Fair and Audubon. The Chicago Tribune has dubbed him “America’s new past master.” His recent Cronkite won the Sperber Prize for Best Book in Journalism and was a Washington Post Notable Book of the Year. The Great Deluge won the Robert F. Kennedy Book Award. He is a member of the Society of American Historians and the Council on Foreign Relations. He lives in Austin, Texas, with his wife and three children.