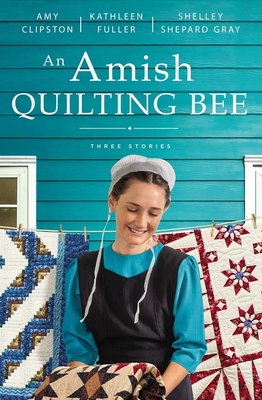 When Colin Zook and his beloved grandmother lose everything in a fire, their greatest loss is a beloved family heirloom quilt that helped keep her dementia at bay. When Joanne Lapp hears about the loss, she decides to re-create the quilt. Colin soon feels himself developing feelings for her, but he's held back by the knowledge that a future with him would involve care of his grandmother and his farm. Will Joanne look past his list of responsibilities and see him for who he truly is?

A Common Thread by Kathleen Fuller

Susie Glick returns from a shopping trip laden with beautiful fabric for her quilting group. On the bus ride, Alex Lehman--her crush from three years ago--sits next to her. Alex left Middlefield to explore the country, and now he's back and ready to join the church. Susie was just a kid when he left, but now she's a woman--and she definitely has his interest. The women in her quilting circle aren't as excited about Alex's return, assuming that he'll leave again in search of adventure. Susie is convinced they're wrong, but just as they start dating, Alex tells Susie he has to leave. He says he'll return, but Susie must decide whether or not she can trust the man she fears has captured her heart.

Stitched Together by Shelley Shepard Gray

Rosie's joy is her yearly project for the Pinecraft Mennonite Quilt Sale, and she dreams of being the top earner. But she's worried that she's bitten off more than she can chew with her latest entry. To make things even more confusing, after coming to terms with her single state, she's recently formed a friendship with Tim Christner. He's only in town for a month, but he has Rosie wondering if she's found love at last. Now all she has to do is figure out how to get the quilt done so she can concentrate on him. But with her once very organized life in total disarray, everything comes to a head just before the sale. Rosie is forced to reexamine her priorities before she loses not only her place in the quilt show but everything else she's ever wanted.