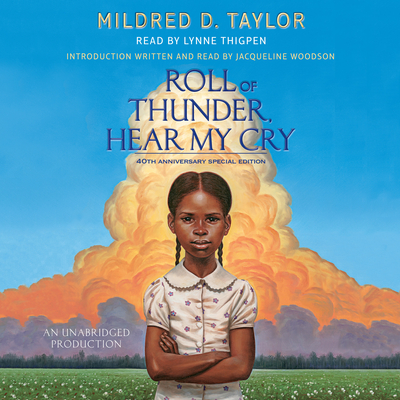 Mildred D. Taylor's Newbery Award-winning masterpiece with an introduction written and read by Jacqueline Woodson, just in time for its 40th Anniversary!

Set in Mississippi at the height of the Depression, this is the story of one family's struggle to maintain their integrity, pride, and independence in the face of racism and social injustice. And it is also Cassie's story--Cassie Logan, an independent girl who discovers over the course of an important year why having land of their own is so crucial to the Logan family, even as she learns to draw strength from her own sense of dignity and self-respect.

Mildred D. Taylor is the author of eight previous novels and has garnered such awards a Newbery Medal, three Coretta Scott King Awards, and a Boston Globe-Horn Book award. She received her Master of Arts degree from the University of Colorado's School of Journalism and went on to work as a proofreader-editor program coordinator for an international house and a community free school. She now devotes her time to her family, writing, and what she terms the "family ranch" in the foothills of the Rocky Mountains.

"The vivid story of a black family whose warm ties to each other and their land give them strength to defy rural Southern racism during the Depression. . . . Entirely through its own internal development, the novel shows the rich inner rewards of black pride, love, and independence despite the certainty of outer defeat." —Booklist (starred review)

"The strong, clear-headed Logan family . . . are drawn with quiet affection and their actions tempered with a keen sense of human fallibility."—pointer, Kirkus Reviews

"The events and setting of the powerful novel are presented with such verisimilitude and the characters are so carefully drawn that one might assume the book to be autobiographical, if the author were not so young."—The Horn Book