The Autobiography of a Transgender Scientist (Paperback) 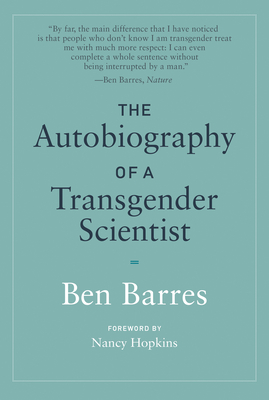 A leading scientist describes his life, his gender transition, his scientific work, and his advocacy for gender equality in science.

Ben Barres was known for his groundbreaking scientific work and for his groundbreaking advocacy for gender equality in science. In this book, completed shortly before his death from pancreatic cancer in December 2017, Barres (born in 1954) describes a life full of remarkable accomplishments—from his childhood as a precocious math and science whiz to his experiences as a female student at MIT in the 1970s to his female-to-male transition in his forties, to his scientific work and role as teacher and mentor at Stanford.

Barres recounts his early life—his interest in science, first manifested as a fascination with the mad scientist in Superman; his academic successes; and his gender confusion. Barres felt even as a very young child that he was assigned the wrong gender. After years of being acutely uncomfortable in his own skin, Barres transitioned from female to male. He reports he felt nothing but relief on becoming his true self. He was proud to be a role model for transgender scientists.

As an undergraduate at MIT, Barres experienced discrimination, but it was after transitioning that he realized how differently male and female scientists are treated. He became an advocate for gender equality in science, and later in life responded pointedly to Larry Summers's speculation that women were innately unsuited to be scientists. Privileged white men, Barres writes, “miss the basic point that in the face of negative stereotyping, talented women will not be recognized.” At Stanford, Barres made important discoveries about glia, the most numerous cells in the brain, and he describes some of his work. “The most rewarding part of his job,” however, was mentoring young scientists. That, and his advocacy for women and transgender scientists, ensures his legacy.

Ben Barres (1954–2017) was Professor and Chair of the Department of Neurology at Stanford University and one of the world's leading researchers on the role of the brain cells known as glia.

His candor and love for science transform the ensuing story into a portrait of a singular personality that was shaped by his status as an outsider.—Science—

Stanford neuroscientist Barres's short, somewhat formal but sincere autobiography, written in the 21 months between his cancer diagnosis and his death in 2017… Barres is profoundly appreciative of both his academic mentors and his trainees, and his prose is matter-of-fact; his activist fire comes through in the very fond introduction by colleague Nancy Hopkins, in which she shares bits of his vitriolic letters to conferences that refused to invite women speakers or create anti-sexual harassment policies. This is a brief, intriguing snapshot of a life cut short.

The book is important for anyone in the trans or scientific community. There aren't many narratives of trans people before 2000 and Barres work in STEM provides a powerful testament to dedication and perseverance... Barres' autobiography cements his exceptional legacy – a high-profile scientist who, as another MIT neuroscientist put it, became 'a role model for role models.'

An unstoppable force of nature, unfazed by headwinds, managing to will all of us onwards and upwards: this was Ben Barres. A highly influential neurobiologist and advocate for women in science, Barres lived an unusually interesting life. He was an openly transgender faculty member at Stanford University School of Medicine in California, and a pioneer in understanding the functions of glia — the most abundant and mysterious cells in the brain. Whether by design or accident, along the way he also became a hero for people from gender and sexual minorities (LGBT+ people), and for early-career scientists generally.

Barres is as open in memoir as he was in life, and the book teaches important, deceptively simple lessons. Be yourself; be happy; don't apologize for who you are. Be respectful, but be honest and express your opinion even (or especially) if it's not popular. Science is exhilarating, and we have a responsibility to do it well, with fairness to all involved. The Autobiography of a Transgender Scientist shows the way.

His autobiography will make you laugh, cry, and appreciate the underdogs of the brain....Many scientists--LGBT and otherwise--will find his candid depiction of both his own life and scientific journey to be wholly inspiring.

Having inhabited both gender roles, Barres brings singular perspective to the question of how to create an even playing field for female and transgender scientists.