To Live Is to Resist: The Life of Antonio Gramsci (Hardcover) 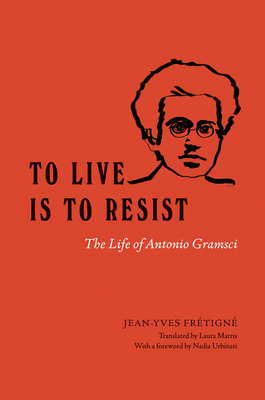 This in-depth biography of Italian intellectual Antonio Gramsci casts new light on his life and writing, emphasizing his unflagging spirit, even in the many years he spent in prison.

One of the most influential political thinkers of the twentieth century, Antonio Gramsci (1891–1937) has left an indelible mark on philosophy and critical theory. His innovative work on history, society, power, and the state has influenced several generations of readers and political activists, and even shaped important developments in postcolonial thought. But Gramsci’s thinking is scattered across the thousands of notebook pages he wrote while he was imprisoned by Italy’s fascist government from 1926 until shortly before his death.

To guide readers through Gramsci’s life and works, historian Jean-Yves Frétigné offers To Live Is to Resist, an accessible, compelling, and deeply researched portrait of an extraordinary figure. Throughout the book, Frétigné emphasizes Gramsci’s quiet heroism and his unwavering commitment to political practice and resistance. Most powerfully, he shows how Gramsci never surrendered, even in conditions that stripped him of all power—except, of course, the power to think.

Jean-Yves Frétigné is maître de conférences in the department of history at the University of Rouen in Normandy, France. He is the author of several books published in French and Italian. This is his first book published in English.

Laura Marris is a writer and translator. Her recent translations include Albert Camus’s The Plague, Louis Guilloux’s Blood Dark, and Geraldine Schwarz’s Those Who Forget. Her first solo-authored book, The Age of Loneliness, is forthcoming. She lives in Buffalo, New York.

“If, as Primo Levi so presciently warned us in 1974, ‘every age has its own fascism,’ it follows that every age needs its own Gramsci. And Jean-Yves Frétigné has given us a Gramsci for our perilous times. This lucidly translated biography traces an intellectual, political, and personal drama that passes through Sardinia, Turin, the Stoics, Spinoza, Machiavelli, Vico, Leopardi, and Marx. We come to understand the origins and explicatory power of Gramscian terms such as ‘subalternity,’ ‘hegemony,’ ‘organic intellectuals,’ and ‘pessimism of the intellect, optimism of the will.’ The epilogue poignantly renders the pathos of Gramsci’s last years. Most importantly, the reader will be inspired by a life and mind that insisted on a participatory and permanent resistance against the seemingly natural order of things.”
— Stanislao Pugliese, Hofstra University

“Gramsci’s political, personal, and prison lives are the source of renewed debate in the neoliberal postcommunist era, with archival finds, speculative conjectures, and ideological polemics. This fine translation of To Live Is to Resist offers a concise narrative of Gramsci’s life as well as an informed and balanced account of the biographical controversies.”
— Michael Denning, Yale University

“To Live Is to Resist carries the promise of something different, more akin to an intellectual biography that emphasizes ideas over events. . . . Gramsci urged us to look at bad detective novels and Jules Verne to understand our political reality, and To Live Is to Resist’s best moments are when it takes seriously the unserious.”
— Jennifer Wilson

"In To Live Is To Resist, Jean-Yves Frétigné sketches the life of Gramsci. . . .   As Nadia Urbinati notes in her stimulating foreword to Frétigné’s book, Gramsci’s was ‘a life of prisons,’ beginning with his own infirm body, continuing with his early life of poverty and often marginal political standing, and ending in actual incarceration."
— Richard Bellamy

"Frétigné’s volume—a lucid, sober, and well-substantiated documentation and interpretation of Gramsci’s life and work—unquestionably stands apart. . . . It is exemplary for tracing the development of ideas against the backdrop of a life, preferring to plumb the depths of the uncertain and enigmatic rather than taking the easy way out. . . . After studying To Live Is to Resist, I am inclined to see Gramsci differently: as an inconvenient Marxist who truly doesn’t fit any of our received frameworks."
— Alan Wald

"[Frétigné brings a] wealth of new material and welcome precision to his biography. . . . If Gramsci has aged better than many of his peers, it is in part because he became a thinker for a defeated, rather than a triumphalist, left. The ground of this inquiry may have shifted in the decades since his death, but the main battle lines remain the same, and this still makes Gram­sci a thinker worth turning to in our moment."