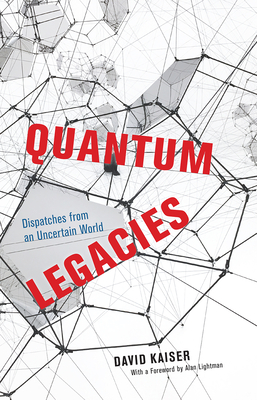 By David Kaiser, Alan Lightman (Foreword by)
$26.00
Usually Ships To the Store in 1-5 Days

The ideas at the root of quantum theory remain stubbornly, famously bizarre: a solid world reduced to puffs of probability; particles that tunnel through walls; cats suspended in zombielike states, neither alive nor dead; and twinned particles that share entangled fates. For more than a century, physicists have grappled with these conceptual uncertainties while enmeshed in the larger uncertainties of the social and political worlds around them, a time pocked by the rise of fascism, cataclysmic world wars, and a new nuclear age.

In Quantum Legacies, David Kaiser introduces readers to iconic episodes in physicists’ still-unfolding quest to understand space, time, and matter at their most fundamental. In a series of vibrant essays, Kaiser takes us inside moments of discovery and debate among the great minds of the era—Albert Einstein, Erwin Schrödinger, Stephen Hawking, and many more who have indelibly shaped our understanding of nature—as they have tried to make sense of a messy world.

Ranging across space and time, the episodes span the heady 1920s, the dark days of the 1930s, the turbulence of the Cold War, and the peculiar political realities that followed. In those eras as in our own, researchers’ ambition has often been to transcend the vagaries of here and now, to contribute lasting insights into how the world works that might reach beyond a given researcher’s limited view. In Quantum Legacies, Kaiser unveils the difficult and unsteady work required to forge some shared understanding between individuals and across generations, and in doing so, he illuminates the deep ties between scientific exploration and the human condition.

David Kaiser is the Germeshausen Professor of the History of Science and professor of physics at the Massachusetts Institute of Technology. He is the author of several books, including How the Hippies Saved Physics: Science, Counterculture, and the Quantum Revival, and is coeditor of Groovy Science: Knowledge, Innovation, and American Counterculture, also published by the University of Chicago Press.

“A masterpiece of historical analysis. . . . Skillfully written and a pleasure to read.”
— Nature

"A work of coherence, accessibility, and rhetorical power not generally found in [these] volumes. . . . Kaiser has woven together a unique, compelling, and kaleidoscopic portrait of the quantum revolution and its implications. He doesn’t hide from the messiness of science but embraces the challenge of understanding its underlying human and social conditions."
— José G. Perillán

"Quantum Legacies does not disappoint. . . . It is a breath of fresh air to see physics writing like this: lucid and friendly, sober and thoughtful, and willing to trust the reader’s engagement and intelligence rather than demanding the former and underestimating the latter. . . .  Superb popular science. . . .  It is hard for me to imagine any physicist who wouldn’t enjoy the fine cloth from which it is cut, nor the pleasing effect it makes."
— Philip Ball

“Engrossing. . . . Leave[s] us with a richer picture of physics as a lived activity.”
— Los Angeles Review of Books

"Most history books written for the wider public favor a narrower understanding of science. David Kaiser's work is a welcomed exception. . . . [He] gives a witty and insightful overview of the development of modern physics. . . . An engrossing read that will give specialists and nonspecialists alike a deeper understanding of how phenom­­ena as diverse as geopolitics and eastern mysticism have shaped physics in the past century."
— Science

"From Einstein to Heisenberg, Schrödinger to Hawking, Kaiser humanises the people and by extension their ideas, all the while making connections between the inner world of the academic quantum theory community and the outer world of global events. This sociopolitical standpoint is a key factor in making the technical science relevant to the non-expert reader. . . . In this collection of highly entertaining essays, he finds the perfect line between scientific scholarship and telling a good story."
— Engineering & Technology

"All together it paints a very compelling picture of how strategic decisions at the public policy level shaped the way physicists have gone about studying the universe. . . . It’s a good story well told."
— Forbes

"Captivating. . . . You can really get the sense of the quantum mechanical impact on various and disparate fields ranging from cosmology to the early foundations of quantum mechanics, the history of quantum mechanics, all the way up through popular culture, weaving its way through how physics pedagogy and even scientific STEM pedagogy is taught to this very day. . . . It's exhaustively researched and referenced. . . . I want people to buy every single copy."
— Brian Keating

"The book paints intimate portraits of some incredible luminaries . . . . Kaiser is an incredible ambassador for physics and its history."
— Matthew Jordan

"Fantastically readable. Anybody interested in either science or history on a professional or a popular level should read it. It's a fantastic introduction to the way you can think about science in all sorts of different interdisciplinary, humanistic ways. It's really a huge amount of fun."
— Matthew Stanley

"It's [Kaiser's] careful analysis of physics's sociological aspects that makes Quantum Legacies a delightful read. . . . This is the kind of material that you won't find in other books on the history and philosophy of physics."
— Ash Jogalekar

"This interesting anthology on selected topics from the rich history of quantum mechanics, especially during its glory days, will engross any reader who has even a modest acquaintance with quantum theory."
— Choice

"Full of striking statistics, commentary, and lovely analogies and metaphors. . . . These are engaging, though-provoking, fun-to-read essays that are compact enough that one can get through several in an evening. They will make you consider familiar physical concepts in new ways. All readers will come away richer in their knowledge of the people and circumstances behind how physics arrived at where it is. You will enjoy this book."
— American Journal of Physics

"The book not only gives an insight into the development of quantum theory and the lives of the scientists involved, it also explores the complexities of funding, political and sociological considerations, and the influence of the Cold War. . . . [It] provides useful background for physics educators and deserves a place in school science libraries."
— Physics Education

"Kaiser—writing in prose that sometimes soars, often intrigues, and always informs—gives us here a remarkable set of vignettes about major developments in physics and cosmology of the past century. His vignettes beautifully integrate science with human history and with insightful descriptions of outsized personalities. This book will be enjoyable and enlightening for a diverse readership: from complete novices in science, to students of science and history, and to professional scientists and historians."
— Kip Thorne, Richard P. Feynman Professor of Theoretical Physics, California Institute of Technology, and 2017 Nobel Laureate in Physics

"Physicists are people! They have insecurities, love lives, monetary concerns, and political opinions, all while striving to uncover the fundamental workings of reality. Kaiser spins engaging tales that both explain fascinating aspects of physics in a lucid way and illuminate the human beings who worked to discover them."
— Sean Carroll, author of Something Deeply Hidden

"Have you ever wondered why Schrödinger chose such a morbid illustration of quantum physics as a half-dead cat? Want to know how an alleged Soviet spy escaped capture and went on to shake up particle physics? Can you guess what propelled The Tao of Physics to bestseller status? If questions like these spark your curiosity, this book is for you. I can imagine no better guide for an insider’s tour of twentieth-century physics than Kaiser. These witty vignettes beautifully illustrate what Kaiser calls the 'doubleness' of scientific research, its ability to bequeath enduring insights while reflecting the quirks and foibles of historical circumstances."
— Deborah R. Coen, author of Climate in Motion

"Explaining physics is easier than explaining physicists. In Quantum Legacies, Kaiser succeeds at both."
— George Dyson, author of Turing’s Cathedral

"What is extraordinary about Kaiser as a writer (and what makes his essays so much fun to read) is not only his ability to animate the range of personalities in these pages, from Einstein to Heisenberg, Schrödinger to Hawking, but also the way he brings the same humanizing impulse to their mind-bending ideas. His talent for uncovering connections between otherworldly ideas and the social and political worlds in which they take shape makes him a simply spellbinding guide to the mysteries of the universe."
— Nell Freudenberger, author of Lost and Wanted

"Kaiser is a master writer, and this is some of his finest work. An extraordinary combination of technical science, rich history, and telling anecdote, Quantum Legacies is cutting-edge scholarship rendered in a style equal to any popular science writing. When a non-academic asks me ‘what is the history of science?’ I will give them this book."
— Matthew Stanley, author of Einstein’s War: How Relativity Triumphed amid the Vicious Nationalism of World War I

"Friendships and rivalries, the demands of war, the limits of technology . . . these are among the rich universe of forces that conflict and conspire to bring us what we usually gloss over as the inevitable march of scientific progress. Kaiser’s book provides a wonderful glimpse behind the curtain into the messier—but far more human—truth of the matter. Beautifully written and extraordinarily well researched, the book makes a profound point about the sociopolitical nature of science that all readers—from physics buffs and historians to students and laypeople—need to hear."
— Amanda Gefter, author of Trespassing on Einstein’s Lawn

“A moving and informative behind-the-scenes portrait of the men (and it was mostly men) who forged the field of quantum physics in the 20th century. . . . What this book shows is that science is as subject to the shifts and changes in fortune as every other human endeavor.”
— Survival by Book

“This unique work is part popular science, part history, and part memoir. . . . Eclectic and thoughtful, it is a book that José G. Perillán termed a ‘work of coherence, accessibility, and rhetorical power.’”
— Physics Today, books that stood out in 2020