The Story of Rufino: Slavery, Freedom, and Islam in the Black Atlantic (Hardcover) 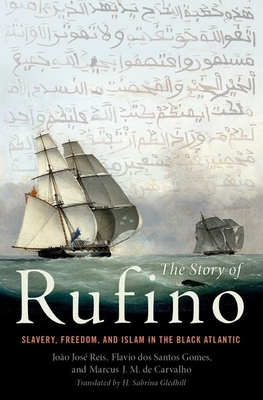 Winner of the Casa de las Am rica Prize for Brazilian Literature, The Story of Rufino reconstructs the lively biography of Rufino Jos Maria, set against the historical context of Brazil and Africa in the nineteenth century. The book tells the story of Rufino or Abuncare, a Yoruba Muslim from the kingdom of Oyo, in present-day Nigeria. Enslaved as an adolescent by a rival ethnic group, he was captured by Brazilian slave traders and taken to Brazil as a slave sometime in the early 1820s. In 1835, after being enslaved in Salvador and Rio Grande do Sul, Rufino bought his freedom with money he made as a hired-out slave and perhaps from making Islamic amulets. He found work in Rio de Janeiro as a cook on a slave ship bound for Luanda in Angola, despite the trans-Atlantic slave trade having been illegal in Brazil since 1831. Rufino himself became a petty slave trader. He made a few voyages before his ship was captured by the British and taken to Sierra Leone in 1841 for trial by the Anglo-Brazilian Mixed Commission to determine if it was equipped for the slave trade, since there were no slaves on board. During the three months awaiting the court's decision, Rufino lived among Yoruba Muslims, his people, and
attended Quranic and Arabic classes. He later returned to Sierra Leone as a witness in a court case and attended classes with Muslim masters for almost two years. Once back in Brazil, he established himself as a diviner -- serving whites and blacks, free and slaves, Brazilians and Africans, Muslim and non-Muslims -- as well as a spiritual leader, an Alufa, in the local Afro-Muslim community. In 1853 Rufino was arrested due to rumors of an imminent African slave revolt. The police used as evidence for his arrest the large number of Arabic manuscripts in his possession, the same kind of material the police had found with Muslim rebels in Bahia thirty years earlier. During his interrogation, Rufino told his life story, which is used to reconstruct the world in which he lived under slavery and in freedom on African shores, aboard slave ships, and in Brazil. An extraordinary Atlantic history carefully pieced together from the archives, The Story of Rufino illuminates the complexities of slavery and freedom in Africa and Brazil and the resilience of ethnic and religious identities.