Sound Man: A Life Recording Hits with The Rolling Stones, The Who, Led Zeppelin, the Eagles , Eric Clapton, the Faces . . . (Paperback) 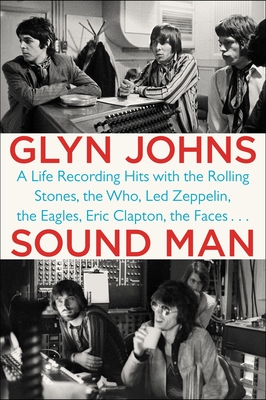 A ROCK AND ROLL MEMOIR FROM GLYN JOHNS, THE LEGENDARY PRODUCER FEATURED IN THE NEW DOCUMENTARY SERIES The Beatles: Get Back

“Few figures in rock history have a more impressive résumé than Glyn Johns...[Sound Man] is full of amazing anecdotes from his fifty-year career.”—Rolling Stone

“A fantastic romp through the pages of rock and roll history.”—Sir Paul McCartney, the Beatles

In 2012, legendary producer and sound engineer Glyn Johns was inducted into the Rock and Roll Hall of Fame. Over the course of his incredible career, Johns helped create some of rock’s most iconic albums, including those by the Beatles, the Rolling Stones, Eric Clapton, the Eagles, the Who, the Clash, and, more recently, Ryan Adams and Band of Horses. In this one-of-a-kind memoir, Johns shares incredible stories about the musicians he’s worked with from the freewheeling sixties to the present. Sound Man is an intimate glimpse into rock and roll history and the perfect gift for any music fan.

GLYN JOHNS was the producer or engineer of a number of rock’s classic albums, including those by the Rolling Stones, Eric Clapton, the Eagles, the Who, the Beatles, the Clash, and such singular artists as Joan Armatrading and Ryan Adams. He was inducted into the Rock and Roll Hall of Fame in 2012.

“Glyn Johns was there. He was there at some of the most important recording sessions in Rock and Roll. Reading his book, you are standing beside him as he sets up the studio in readiness for the arrival of groups like Led Zeppelin, The Beatles and The Rolling Stones. For me it is a fantastic romp through the pages of Rock and Roll history.” —Sir Paul McCartney

“Glyn Johns has been a very important person in my recording life (and also his brother Andy).  Glyn was the first recording engineer who helped me to understand recording and through that he was very supportive in introducing me to a lot of sessions with important people such as Ben Sidren, Leon Russell, Ronnie Lane, Pete Townshend and Howling Wolf. This together, of course, with many of the great recordings he did with us. He is one of the best.” —Charlie Watts

“Sound Man will make readers aware of the many sides of Glyn Johns, a giant of a man and one of my best friends from the moment we met in 1963 to present day. Apart from his genius behind the faders and success as the producer of myriad hits, his humor comes through here, together with his unfailing desire to do the very best work he could in the face of some frighteningly egotistical artists.”—Bill Wyman

“If you remember the sixties then you probably weren't there, unless of course your name is Glyn Johns. Sound Man is an intimate, humorous journey through the corridors of the music industry, as told by one of the greatest record producers of all time. I'm proud to be mentioned here and there, and to have worked with Johns on so many memorable occasions. A great read!” —Eric Clapton

“Glyn Johns was the most sought after sound engineer at the time when the recording industry was just exploding in the early 60s in London. He soon became the first choice of the artists who wrote their own songs and wanted a producer who could create for them a great sound for their recordings. He was always a strong and direct influence on the talent he worked with, and his records sounded brilliant! He soon became one of the very few truly great record producers and remained so over the last fifty years. Reading Sound Man reminded me of just how many incredible people he worked with and how many great iconic records he made. It's fantastic reading.” —Chris Blackwell, founder of Island Records

“Sound Man opens with a declaration: A record producer has to have an opinion and the ego to express it more convincingly than anyone else. So Glyn Johns has stood his ground with a few big-headed rock stars? I must be the exception. I've only had transcendental moments in the studio with Johns. Returning to the control room after a studio take I often felt like running: the joy of hearing what Johns had created out of the glue-and-string that was The Who was like a drug. He is an artist himself of supreme talent and experience.” —Pete Townshend