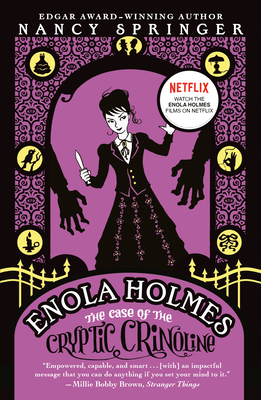 This is book number 5 in the An Enola Holmes Mystery series.

Enola Holmes--younger sister to Sherlock Holmes--is back on another case! (Cover may vary)

Enola Holmes's landlady, Mrs. Tupper, is the closest thing Enola has to family these days, besides her occasional run-ins with her brother Sherlock. Even though Mrs. Tupper is nearly deaf and can barely cook, she's an endearing presence as Enola longs for her absent mother. So imagine her horror when Enola comes home to find Mrs. Tupper kidnapped! Who would take her, and why? And what does Florence Nightingale have to do with it? From the master of mystery Nancy Springer, here's another absorbing adventure for our award-winning, unstoppable heroine, Enola Holmes.

Praise for Enola Holmes: The Case of the Missing Marquess:

"Empowered, capable, and smart . . . [with] an impactful message that you can do anything if you set your mind to it."--Millie Bobby Brown, Stranger Things

* "This is a terrific package. Springer not only provides two fine mysteries, breathtaking adventure, and key-eyed description, but she also offers a worthy heroine." --Booklist, starred review

Nancy Springer has published forty novels for adults, young adults and children. In a career beginning shortly after she graduated from Gettysburg College in 1970, Springer wrote for ten years in the imaginary realms of mythological fantasy, then ventured on contemporary fantasy, magical realism, and women's fiction before turning her attention to children's literature. Her novels and stories for middle-grade and young adults range from contemporary realism, mystery/crime, and fantasy to her critically acclaimed novels based on the Arthurian mythos, I AM MORDRED: A TALE OF CAMELOT and I AM MORGAN LE FAY. Springer's children's books have won her two Edgar Allan Poe awards, a Carolyn W. Field award, various Children's Choice honors and numerous ALA Best Book listings. Her most recent series include the Tales of Rowan Hood, featuring Robin Hood’s daughter, and the Enola Holmes mysteries, starring the much younger sister of Sherlock Holmes.