The Life of Saint Teresa of Avila by Herself (Paperback) 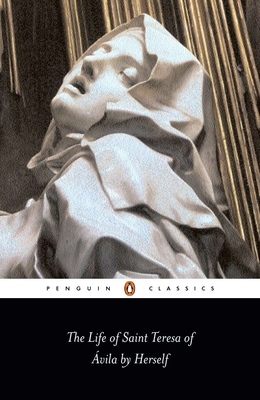 Born in the Castilian town of Avila in 1515, Teresa entered the Carmelite convent of the Incarnation when she was twenty-one. Tormented by illness, doubts and self-recrimination, she gradually came to recognize the power of prayer and contemplation—her spiritual enlightenment was intensified by many visions and mystical experiences, including the piercing of her heart by a spear of divine love. She went on to found seventeen Carmelite monasteries throughout Spain. Teresa always denied her own saintliness, however, saying in a letter: "There is no suggestion of that nonsense about my supposed sanctity." This frank account is one of the great stories of a religious life and a literary masterpiece—after Don Quixote, it is Spain's most widely read prose classic.

For more than seventy years, Penguin has been the leading publisher of classic literature in the English-speaking world. With more than 1,700 titles, Penguin Classics represents a global bookshelf of the best works throughout history and across genres and disciplines. Readers trust the series to provide authoritative texts enhanced by introductions and notes by distinguished scholars and contemporary authors, as well as up-to-date translations by award-winning translators.

J. M. Cohen, born in London in 1903 and a Cambridge graduate, was the author of many Penguin translations, including versions of Cervantes, Rabelais and Montaigne. For some years he assisted E. V. Rieu in editing the Penguin Classics. He collected the three books of Comic and Curious Verse and anthologies of Latin American and Cuban writing. He frequently visited Spain and made several visits to Mexico, Cuba and other Spanish American countries. With his son Mark he edited the Penguin Dictionary of Quotations and its companion Dictionary of Modern Quotations.

J. M. Cohen died in 1989. The Times’ obituary described him as ‘the translator of the foreign prose classics for our times’ and ‘one of the last great English men of letters’, while the Independent wrote that ‘his influence will be felt for generations to come’.