A Woman of Endurance: A Novel (Hardcover) 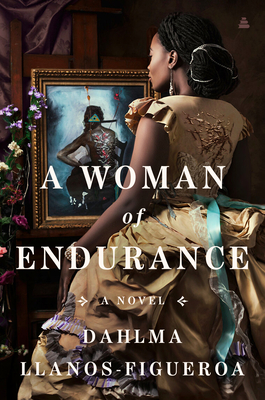 Combining the haunting power of Toni Morrison’s Beloved with the evocative atmosphere of Phillippa Gregory’s A Respectable Trade, Dahlma Llanos-Figueroa’s groundbreaking novel illuminates a little discussed aspect of history—the Puerto Rican Atlantic Slave Trade—witnessed through the experiences of Pola, an African captive used as a breeder to bear more slaves.

A Woman of Endurance, set in nineteenth-century Puerto Rican plantation society, follows Pola, a deeply spiritual African woman who is captured and later sold for the purpose of breeding future slaves. The resulting babies are taken from her as soon as they are born. Pola loses the faith that has guided her and becomes embittered and defensive. The dehumanizing violence of her life almost destroys her. But this is not a novel of defeat but rather one of survival, regeneration, and reclamation of common humanity.

Readers are invited to join Pola in her journey to healing. From the sadistic barbarity of her first experiences, she moves on to receive compassion and support from a revitalizing new community. Along the way, she learns to recognize and embrace the many faces of love—a mother’s love, a daughter’s love, a sister’s love, a love of community, and the self-love that she must recover before she can offer herself to another. It is ultimately, a novel of the triumph of the human spirit even under the most brutal of conditions.

Dahlma Llanos-Figueroa was born in Puerto Rico. As a child she was sent to live with her grandparents in the South Bronx, where she was introduced to the culture of rural Puerto Rico, including the storytelling skills that came naturally to the women, especially the older women, in her family. Much of her work is based on her experiences during this time. Llanos-Figueroa taught creative writing, language and literature in the New York City school system before becoming a young-adult librarian and writer. Her first novel, Daughters of the Stone, was a Finalist for the PEN/Robert W. Bingham Prize, and her short stories have been published in anthologies and literary magazines such as Breaking Ground: Anthology of Puerto Rican Women Writers in New York 1980-2012, Growing Up Girl, Afro-Hispanic Review, Pleaides, Latino Book Review, Label Me Latina/o and Kweli Journal. She lives in New York City.

“[A] compelling debut…Beautifully told by Llanos-Figueroa, this is an unforgettable saga of the magical beliefs binding one family for generations.”  — Booklist on Daughters of the Stone

” This commanding exploration of women's history will resonate with readers of strong African American feminist narratives like those of Toni Morrison and Ntozake Shange. With its unflinching description of slavery, it should also appeal to readers of slave narratives like Charles Johnson's Middle Passage and Manu Herbstein's Ama: A Story of the Atlantic Slave Trade.”  — Library Journal (starred review) on Daughters of the Stone

“Dahlma Llanos-Figueroa's Daughters of the Stone sings as few novels can. It also tells us of a culture and nation that is underrepresented in our literature: Puerto Rico. And it does so with brilliant flourishes in a narrative both gripping and intimate. Conveying a wide sweep of history, as witnessed by several generations of women, the book has the warmth of autobiography while sustaining a firm and stately control of technique and language.” — 2010 PEN Literary Awards Program on Daughters of the Stone

"A Woman of Endurance is a new classic of Caribbean literature. With exquisite, patient, poetic prose, Dahlma Llanos-Figueroa illuminates the world of 19th-century Puerto Rican haciendas and the slavery on which they depended. By telling this story through the eyes of Pola, one of those slaves, Llanos-Figueroa has written the grand epic that Pola—and all the other forgotten women of endurance—richly deserve." — —Cristina García, author of Dreaming in Cuban

"Dahlma's prose is a poetic hurricane, A Woman of Endurance is an exquisite jewel of a novel. No other writer addresses our African roots with such luminous intensity." — —Ernesto Quiñonez, Bodega Dreams and Taína

“Dahlma Llanos-Figueroa’s novels are as necessary to Puerto Rican literature as rice and beans are to the Puerto Rican diet. A Woman of Endurance should be taught as both history and literature of las Americas; it cements Llanos-Figueroa as an urgent and critical voice for our times. Her rigorous and compassionate attention to the human experience of the horrific legacy of enslaved Black people in Puerto Rico is a triumph for literature, Puerto Rican and otherwise, and a testament to the enduring spirit of human beings.” — —Marisel Vera, author of The Taste of Sugar

"A Woman of Endurance is a marvelous gift and a complete triumph. The women in this novel create themselves and build paths toward a self-defined freedom. Llanos-Figueroa has given us a love letter that was lost among the many receipts and historical narratives told only by the victorious." — —Willie Perdomo, award-winning poet and author of Where Nickels Cost a Dime and The Crazy Bunch

“Pola's story had to be told and the only artist who could write it is Dahlma Llanos-Figueroa, who inhabits her characters so thoroughly that a reader could easily believe the writing of this book was an act of wizardry. A Woman of Endurance is a must-read."
— —Connie May Fowler, author of Before Women had Wings and A Million Fragile Bones

"A Woman of Endurance is a wonder, at once wrenching and tender, gripping and gorgeous, sweeping and profound. Llanos-Figueroa has written a ground-breaking contribution to the literature of enslavement, of the Americas, and of the possibilities for healing and becoming free.” — —Carolina de Robertis, author of The President and the Frog

“The horrific enslavement of more than 15 million Africans from West and Central Africa to build the Americas carried many untold stories. Pola's is one of those stories that insisted on being told.” — —Dr. Marta Moreno Vega, President/Founder of Creative Justice Initiative Inc.

Dahlma Llanos-Figueroa’s A Woman of Endurance is a powerful novel, at times harrowing, but also full of love. A delicate balancing act of history and pain and grace and beauty. This is the Black Puerto Rican novel I have been waiting for my whole life.  — —Jaquira Díaz, author of Ordinary Girls

“The restoration of [Pola’s] Yoruba spirituality and her deepened friendships are both touching and emotionally palpable. This harrowing story is hard to put down.”  — Publishers Weekly

“Llanos-Figueroa’s prose is at once merciless and elegantly descriptive.” — Booklist