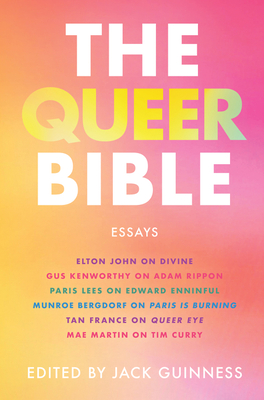 Our queer heroes write about theirs.

In 2016, model and queer activist Jack Guinness decided that the LGBTQ+ community desperately needed to be reminded of its long and glorious history of stardom—and he was spurred to action. The following year, QueerBible.com was born, an online community devoted to celebrating queer heroes, both past and present. “So much queer history is hidden or erased,” says Guinness. “The Queer Bible is a home for all those personal stories and histories.”

The Queer Bible is a powerful and intimate essay collection of gratitude, and an essential, enduring love letter to the queer community.

We stand on the shoulders of giants. Now we praise their names.

In a recent profile, British GQ described Jack Guinness as ‘The Coolest Man in Britain’. Cambridge educated Jack Guinness began his career as a model, starring in global campaigns for brands such as L'Oreal, Dunhill and Dolce and Gabbana. As a writer, style and fashion commentator, he has contributed to the Sunday Times Style, Vogue Italia, The Guardian, British GQ, Gentleman’s Journal and Tatler. He also contributed an essay to former Stonewall Chief Executive Baroness Ruth Hunt's essay collection on faith and sexuality entitled, Queer Prophets, alongside writers such as Dustin Lance Black.

Jack has developed and starred in digital content for Gucci, Ralph Lauren, Vogue, Vice and GQ, travelled to Japan to star in Channel 4's anarchic World Of Weird series, and hosted live social media takeovers for brands such as Alexa Chung and Hugo Boss. Guinness is proud to be on the British Fashion Council’s advisory Style Council for London Fashion Week Men’s, and passionately champions young designers and British manufacturing. Jack was recently announced as a Contributing Editor for British GQ magazine.

Jack publically 'came out' in an interview with The Guardian newspaper, launching the LGBTQ+ community he founded, The Queer Bible which celebrates the works and lives of the global queer community. The Queer Bible podcast with guests including, Sir Ian Mckellen, activist Munro Bergdorf and Drag Race's Courtney Act is being released towards the end of 2021.