On the Come Up (Paperback) 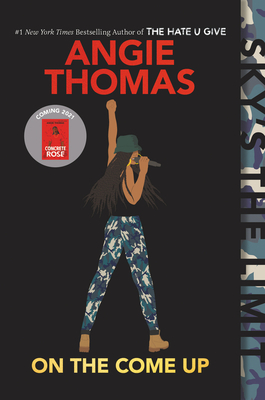 “For her sophomore book, Thomas gives us a heroine — Brianne — who is struggling against both her family’s expectations as well as those of white people as she tries to make her way doing what she loves: rapping. We follow her through ups and downs as she navigates racism at her school and the expectations of black girls in the music world. Excellently written and incredibly unputdownable, you will cheer and cry as Bri makes her way!”
— Melissa Fox, Watermark Books & Cafe, Wichita, KS

Sixteen-year-old Bri wants to be one of the greatest rappers of all time. Or at least win her first battle. As the daughter of an underground hip hop legend who died right before he hit big, Bri’s got massive shoes to fill. But it’s hard to get your come up when you’re labeled a hoodlum at school, and your fridge at home is empty after your mom loses her job. So Bri pours her anger and frustration into her first song, which goes viral . . . for all the wrong reasons.

Bri soon finds herself at the center of a controversy, portrayed by the media as more menace than MC. But with an eviction notice staring her family down, Bri doesn’t just want to make it—she has to. Even if it means becoming the very thing the public has made her out to be.

Insightful, unflinching, and full of heart, On the Come Up is an ode to hip hop from one of the most influential literary voices of a generation. It is the story of fighting for your dreams, even as the odds are stacked against you; and about how, especially for young black people, freedom of speech isn’t always free.

“For all the struggle in this book, Thomas rarely misses a step as a writer. Thomas continues to hold up that mirror with grace and confidence. We are lucky to have her, and lucky to know a girl like Bri.”—The New York Times Book Review

Plus don't miss Concrete Rose, Angie Thomas's powerful prequel to her phenomenal bestseller, The Hate U Give!

Angie Thomas is the author of the award-winning, #1 New York Times bestselling novels The Hate U Give, On the Come Up, and Concrete Rose, as well as Find Your Voice: A Guided Journal for Writing Your Truth. A former teen rapper who holds a BFA in creative writing, Angie was born, raised, and still resides in Mississippi. You can find her online at www.angiethomas.com.

★ “This follow-up to Thomas’ landmark The Hate U Give, set in the same fictional city after the events of that book, demonstrates again Thomas’ gift for crackling dialogue, complex characterization, and impactful emotion. Readers already lining up for this title won’t be disappointed.” — Bulletin of the Center for Children’s Books (starred review)

★ “While acknowledging that society is quick to slap labels onto black teens, the author allows her heroine to stumble and fall before finding her footing and her voice. Thomas once again fearlessly speaks truth to power; a compelling coming-of-age story for all teens.” — School Library Journal (starred review)

★ “On the Come Up truly shines in its exploration of Bri’s resilience, determination, and pursuit of her dreams. In this splendid novel, showing many facets of the black identity and the black experience, Thomas gives readers another dynamic protagonist to root for.” — ALA Booklist (starred review)

★ “With sharp, even piercing, characterization, this indelible and intricate story of a young girl who is brilliant and sometimes reckless, who is deeply loved and rightfully angry at a world that reduces her to less than her big dreams call her to be, provides many pathways for readers.” — Horn Book (starred review)

“For all the struggle in this book, Thomas rarely misses a step as a writer. Thomas continues to hold up that mirror with grace and confidence. We are lucky to have her, and lucky to know a girl like Bri.” — New York Times Book Review

“This book beckons young readers and music lovers alike with an homage to the forefathers of hip-hop that also assures the feminine voice is never dismissed from the cypher.” — Washington Post

“On the Come Up offers a complicated, imperfect heroine who lives and breathes her truth on every page.” — Entertainment Weekly

“On the Come Up is earnest and warm-hearted, a careful examination of social issues that’s built around an immensely endearing main character. It’s likely to assure Thomas’s continued and well-deserved dominance on the best-seller lists.” — Vox